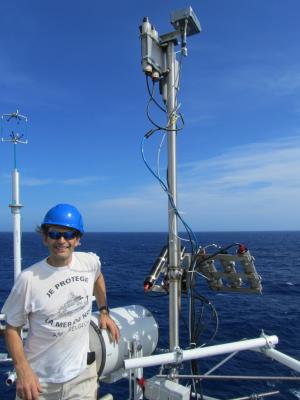 What is the challenge behind the project?

Harmful Algal Blooms (HABs) are a common problem in the France (Channel) England (FCE) area. HABs are the result of excessive growth of micro-algae (phytoplankton) which can produce toxins that have harmful effects on marine life and, through the consumption of seafood, on humans. Toxins that go above regulatory threshold levels result in the closure of entire shellfisheries, creating huge economic losses for the industry.

Currently, HABs are monitored using boat surveys for collection and analyses of discrete water samples. To make the current monitoring effort more efficient, the goal of our project is to develop a web-based alert system for HABs and water quality that would greatly enhance the monitoring capability for these in the FCE.

Our web-based alert system draws on the latest European Space Agency satellite data from Copernicus Sentinel-3, to provide accurate risk-alert maps of HABs, which will facilitate better management of shellfisheries in the Channel area.

Just how big is the economic impact of HABs?

In the EU, the annual cost of HABs to tourism and fisheries is €918 M [1] (Hoagland & Scatasta 2006, Eco Studies Vol 189). The exact costs in the FCE area are unknown, but are expected to be significant due to the importance of these industries in the region and the frequency of HABs.

The value of the South West UK shellfishery alone is estimated to be €8.25M per year, of which €2.9M is lost to HABs [2] (source EA) which could potentially be saved by using the web alert system that is being developed by S-3 EUROHAB.

What are the unique benefits of your project?

The overall benefit of the project is to improve the management of HABs and water quality in the FCE by creating a system with daily risk maps using the latest satellite technology. This will enable faster reaction time and improved spatial and temporal coverage for surveying affected areas.

The alert system has been developed with marine managers and industry end-users and will help these and other stakeholders to improve decision making and stock management relating to HABs.

A socio-economic survey of the cost of poor water quality and HABs and the benefit of using the web based alert system are also being conducted, which will ultimately benefit marine managers and shellfish producers by having more frequent spatial and temporal updates of HABs over the region.

The project is also assessing the environmental drivers, transport and dispersion of key HAB species that regularly occur in the FCE, which will also benefit these stakeholder groups.

What do you see as being the legacy of this project?

In our final year of the project our goal is to test the alert system over other regions that have a high economic turnover of shellfish and experience problems with the same HAB species. This includes the West Coast of Scotland, Ireland, Nantes and the French Mediterranean.

Pilot tests will be conducted for these regions using data from stakeholders to assess the transferability of the system. These stakeholders will provide feedback on improving the system for their daily operations.

At the end of the project, we’ll be holding a symposium to showcase our results and provide training on the web-alert system. We already engage with stakeholders in marine policy, marine management and the shellfish industry in the FCE. During the symposium we will invite representatives in these sectors from other European networks, to teach them about the web alert system so that they can test it in other regions.

Based on the interest generated from stakeholders, at the end of the project the web alert system will be transferred to and operated by NERC Earth Observation Data Acquisition and Analysis Service (NEODAAS) at Plymouth Marine Laboratory, who will continue to maintain the service (at no net revenue) for end users.

The hope is that by using this service, end users will benefit from reduced stock loss and improved management techniques.

Why choose to conduct your project in the framework of cross-border cooperation?

A cross-border cooperation is essential because HABs often start in one area of the FCE and evolve to become problematic in another.

This project utilises a cross-border approach to enhance the spatial and temporal data coverage which will facilitate faster response times, better spatial management of HAB events and to make operations more cost effective.

In addition, the socio-economic impacts of harmful algal blooms on the FCE have not to date, been evaluated. This requires cross-border cooperation between experts in the field, which is being conducted within the S-3 EUROHAB project.

How has Interreg FCE been of help?

The main benefit from the Interreg FCE programme is to combine expertise between UK and French institutes to tackle the common problems of HABs and water quality in the Channel area.

As a result of this collaboration, we have been able to link national monitoring data sets for HABs and group them into a common data portal. We have also been able to draw on expertise of institutions such as IFREMER-Brest, to develop maps of water quality. We have also been able to develop HAB risk maps using Sentinel-3 of four species that commonly occur in the FCE. This information is being disseminated to the shell-fishing industry and other key end users in France and the UK. 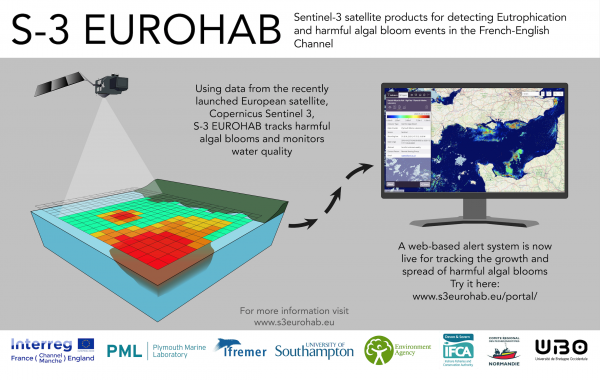 S-3 EUROHAB is € 3.6 million euro project, of which € 2.6 million euros is funded by the European Regional Development fund via the Interreg France (Channel) England programme.

The 4-year project started in November 2017 and completes in October 2021. It is a partnership between 9 project partners, 4 in the UK and 5 in France.